As can be seen in the figure below, the WDS and the other catalogs we maintain are being added at a prodigious rate. A great deal of this work is coming from data mining, especially DR2 from Gaia. While this can be useful, it is always there to be mined, and based on some private discussions it is possible that the best and final Gaia astrometric solution will not be produced until DR4 or later. 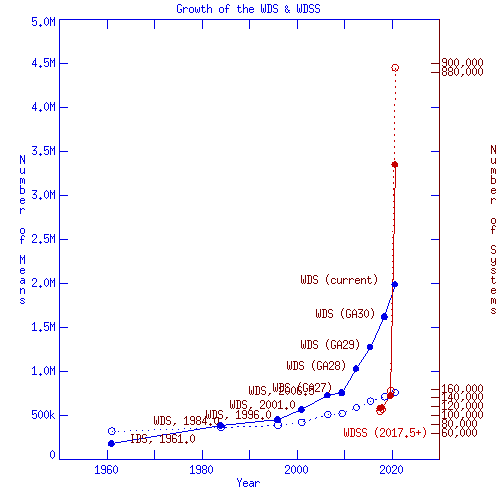 As a result, we have generated a list of pairs that need to be observed. This can be regenerated each time there is a major addition to the WDS, These lists include pairs which either are unconfirmed or pairs which have not been measured in many years ("many" set arbitrarily at 20 years). In the initial formulation two lists would be generated:

The above lists are in WDS summary line format.

For these neglected pairs, even a non-detection can be useful if your observing capability is much greater than the parameters of the pair in question. For the neglected pairs where date - last is a very large number, the pair may be lost or miscataloged, and it may involve detective work or the perusal of old articles. This type of investigative work may be found especially appealing.

If the WDS and associated databases were helpful for your research work, the following acknowledgment would be appreciated:

"This research has made use of the Washington Double Star Catalog maintained at the U.S. Naval Observatory.''

A notification of references to relevant papers is appreciated.

Regular website maintenance is scheduled for
Thursdays from 3-5pm Eastern Time, during
which time the website may be unavailable.